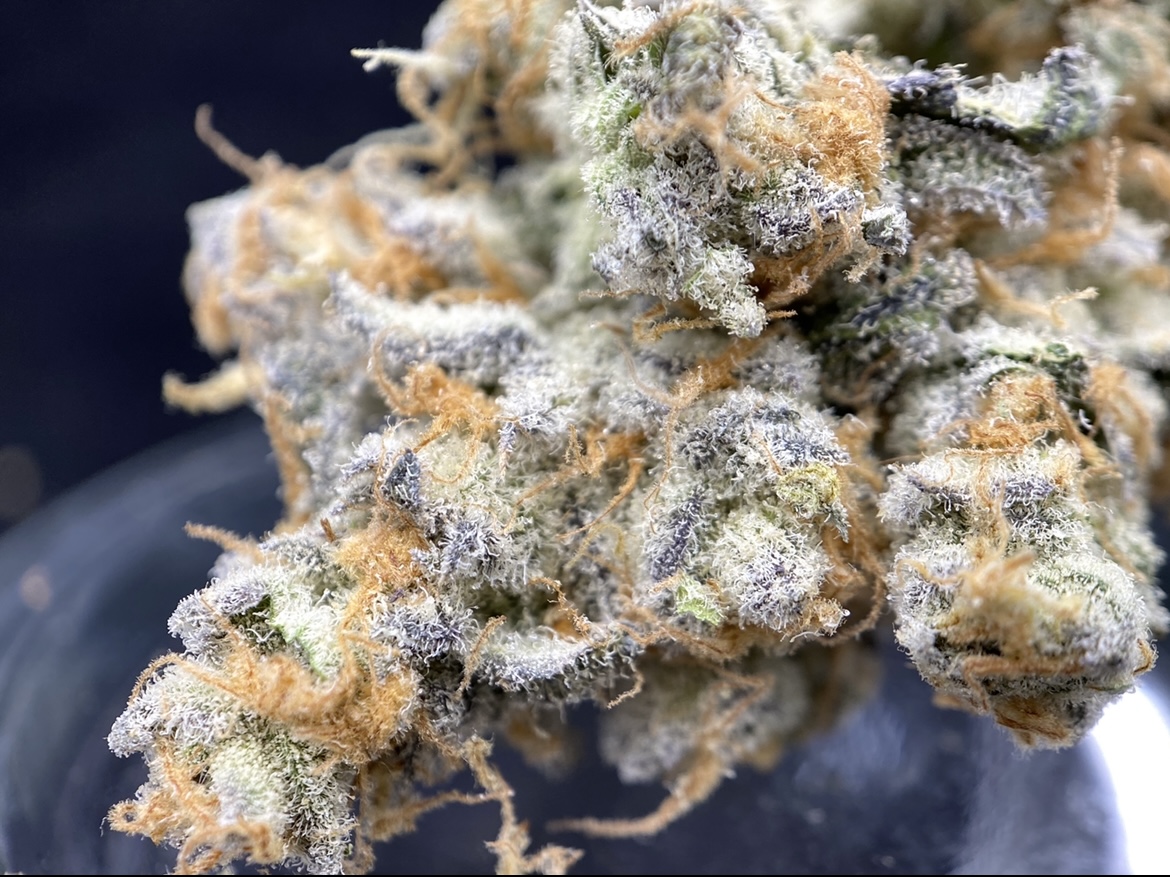 Blueberry Triple OG, also known as Triple Blue, is an indica-dominant cross of the ever-popular Blueberry and the mysterious Triple OG. This strain’s terpene profile speaks to its lineage with sweet berry, pungent fuel, and floral notes. Blueberry Triple OG sits in the body, leaving the consumer laidback and worry-free. The slight euphoria also offers a touch of creativity, making this indica fun and functional at the proper dose.

Pink Runtz is a hybrid marijuana strain and a phenotype of the original Runtz, which crosses Zkittlez with Gelato. The hype around this strain has been firmly established - and for good reason. Pink Runtz features an aroma that is sweet and fruity like candy. This strain produces uplifting effects that are known to be long-lasting. Growers say Pink Runtz is distinguished by an extremely dense bud structure with dark green-to-purple hues. 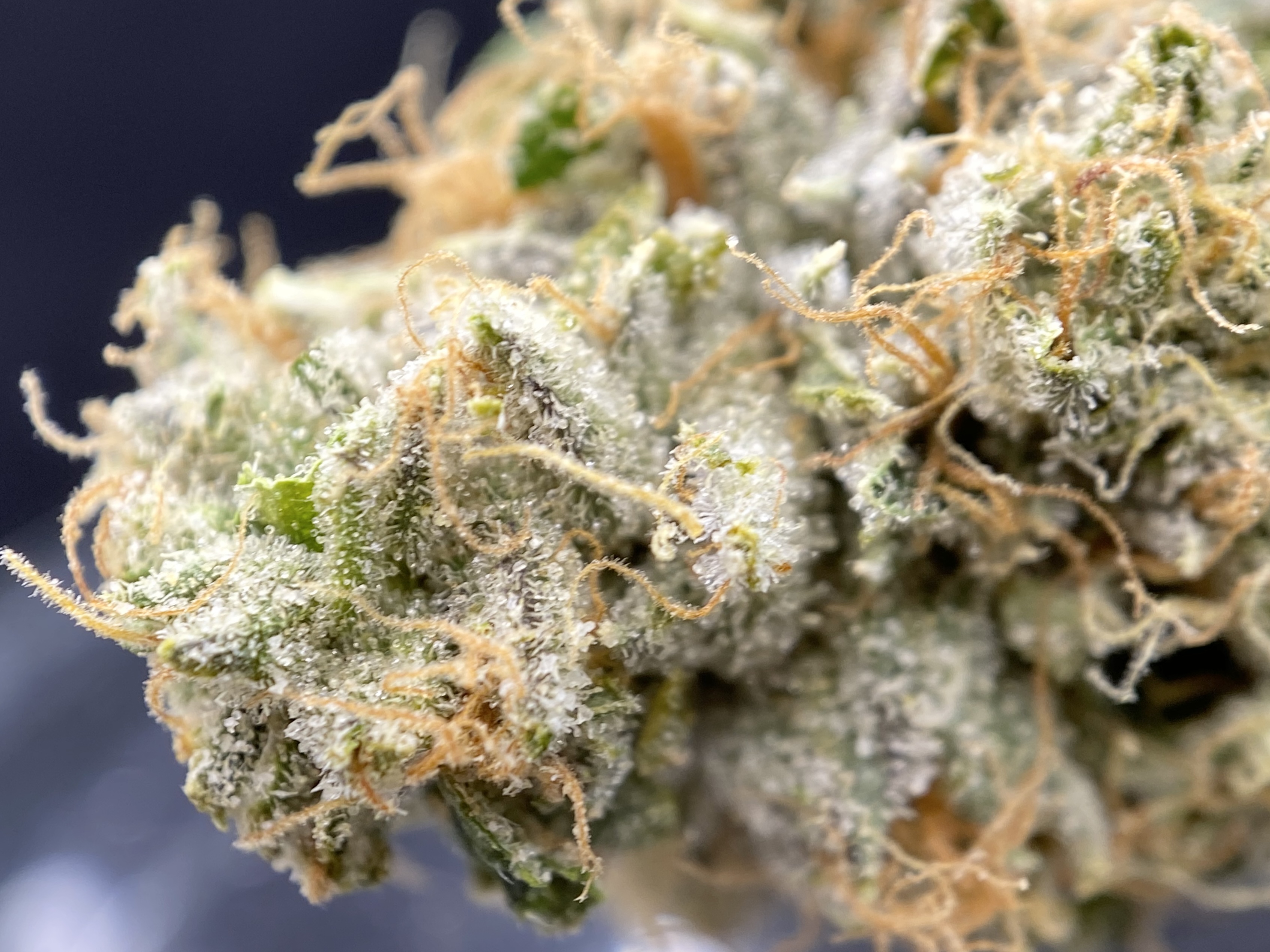 This indica-dominant hybrid (sativa/indica ratio unknown) is a cross of Sour Diesel and Skywalker OG, both widely popular strains. It's rumored to be highly potent, but there are few if any publicly available test results on THC content to back this claim. The same is true of CBD levels, though the lack of information alone suggests this strain shouldn't be used to treat conditions that require CBD preparations, such as seizure disorders. Sour Skywalker OG has a dank, pungent smell of earth and lemon, as well as a sour flavor with fruity notes of citrus and lemons. The nugs are dense and forest green with purple hues and a thick layer of trichomes. This strain produces an intense yet calming, indica-driven body buzz matched with intense, euphoric cerebral effects. It's an effective treatment for muscle spasms, chronic pain, insomnia, and stress. Reports of adverse effects are scarce, but users should probably expect the usual: cottonmouth, watery eyes, and possible paranoia. Sour Skywalker OG is a delicacy most commonly found in San Diego and Los Angeles, though it also sells in parts of Oregon.

Birthday Cake, also known "Birthday Cake Kush," is an indica-dominant hybrid with strong body effects and sweet cake-like flavor. As decadent as its Girl Scout Cookies and Cherry Pie parent strains, Birthday Cake buds bloom with a crystalline icing of THC-rich resin. Like any dessert, Birthday Cake is the perfect way to end your day, with deeply relaxing effects that soothe the body without sedating the mind. This strain is preferred by patients treating pain, anxiety, appetite loss, inflammation, and headaches.

Oreoz, also known a "Oreo Cookies" and "Oreos," is a potent hybrid marijuana strainmade by crossing Cookies and Cream with Secret Weapon. This strain produces a long-lasting and relaxing high. Consumers should take caution as the high potency of Oreoz may be overwhelming to those new to cannabis. This strain has an aroma reminiscent of campfire s'mores, with extra delicious hints of chocolate and diesel. Medical marijuana patients use Oreoz to help relieve symptoms associated with appetite loss, insomnia, chronic stress and depression. Growers say this strain has dense buds that are lumpy, long, and neon green in color with amber hairs and glittering trichomes. 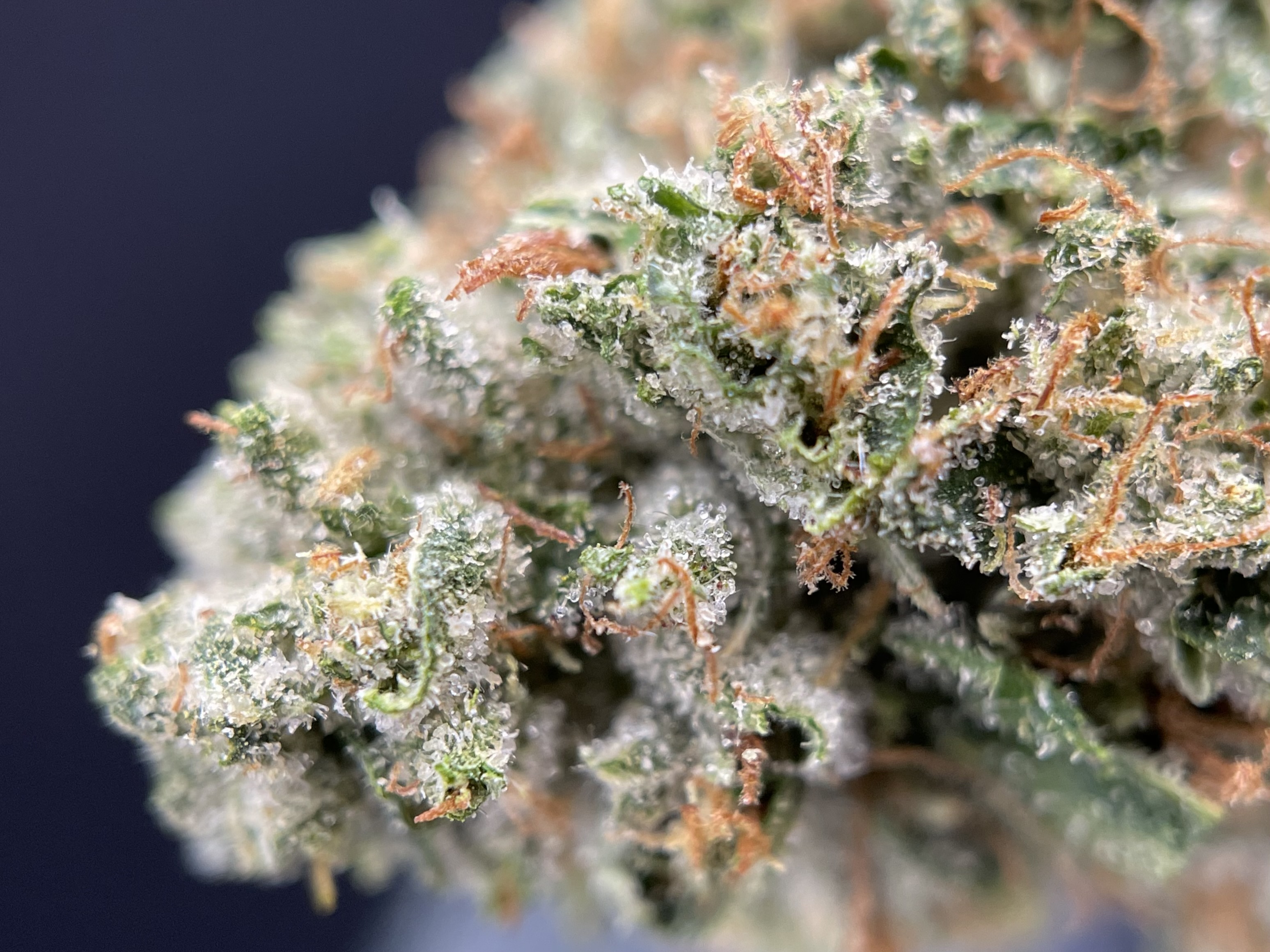 Blue Sky is an indica dominant hybrid strain (70% indica/30% sativa) created through crossing the classic LSD X Rocky Mountain Blueberry strains. If you're looking for the perfect lazy day strain for those afternoons when you want to just kick back with friends and appreciate nature, Blue Sky is definitely for you. This bud packs a super relaxing high that fills both mind and body with a sense of deep relaxation without causing sedation in the slightest. You'll feel euphoric with a sense of tingly creativity and sociability that helps with conversation, up until you get hit with a heavy case of the giggles. Thanks to these effects and its high of 32%+ average THC level, Blue Sky is often said to be perfect for treating those suffering from conditions such as insomnia, depression, headaches or migraines, cramps or muscle spasms, and seizures. This bud has a sweet berry flavor with a rich spicy earth overtone that turns flowery upon exhale. The aroma is of fresh pungent herbs and rich berry-infused earth with just a touch of spicy florals. Blue Sky buds have dense light green nugs with light orange hairs, rich red and blue undertones, and a coating of thick frosty bright white crystal trichomes.

An award-winning indica cultivar from Dinafem seeds, Purple Afghan Kush is a cross of Purple Kush and Bubba Kush. It offers notes of freshly sliced pineapple. Alongside its unique terpene profile, the strain offers deep relaxation without being completely overwhelming. 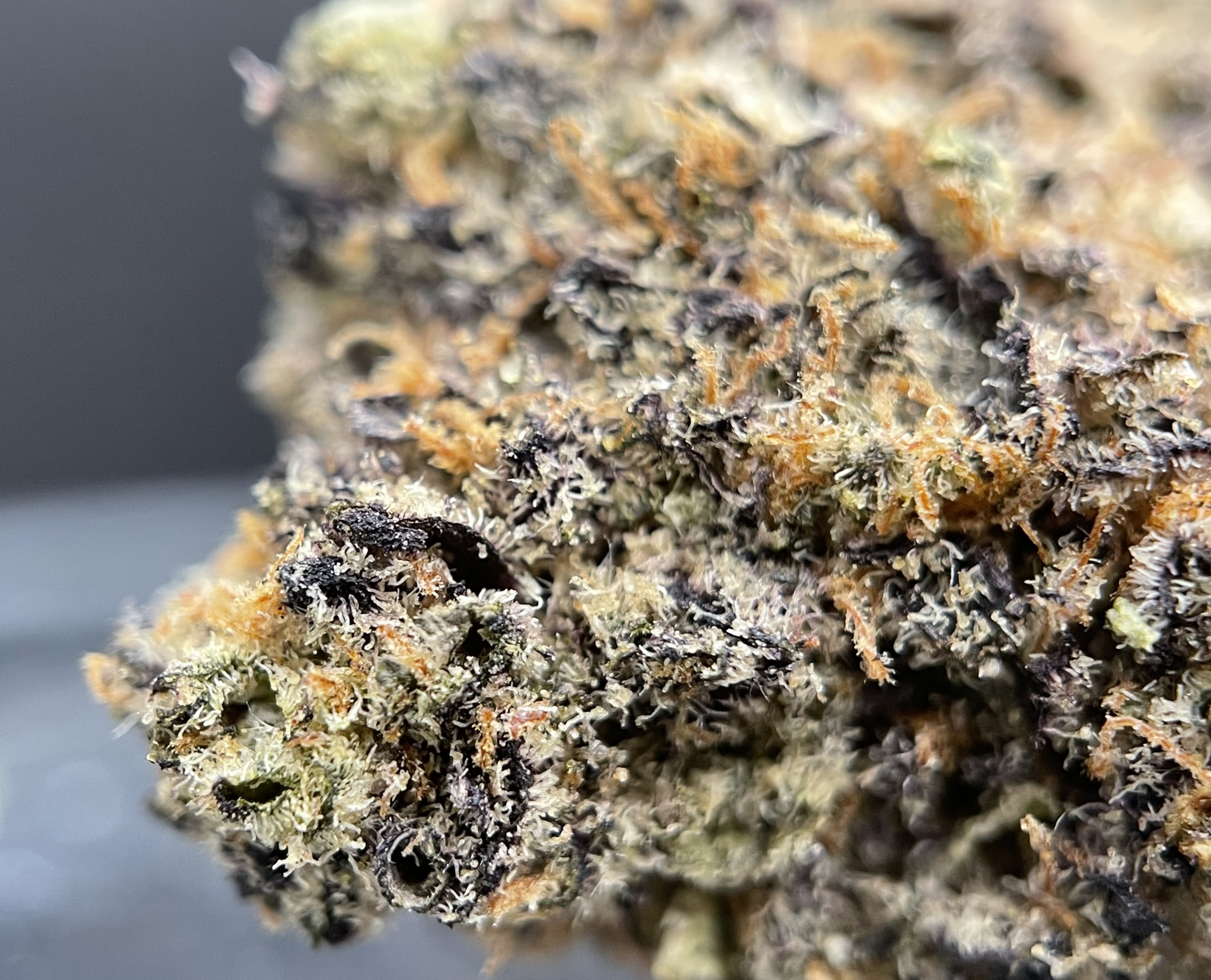 Snow Leopard, from the mysterious breeder Bodhi Seeds, is one of the more unique seed strains out there, crossing the dual multinational genetics of Tigermelon and Snow Lotus, both of which have strong Haze and Afghani influences as well as Thai and Mexicanelements. The majority of observed phenotypesare indica-dominant plants that produce numerous sticky colas and a rich tropical smell with woody undertones. Known for its “creeper” effect, Snow Leopard will eventually leave the user in a tranquil cloud, lost in deep thought and glued to their seat.

Sugar Cake, also known as “Sugar Cake #21,” is an indica dominant hybrid strain (70% indica/30% sativa) created through crossing the tasty Divorce Cake X Jungle Cake strains. When it comes to the flavor of Sugar Cake, the name says it all. Sugar Cake packs a sweet and sugary nutty cake flavor with creamy vanilla and sour fruity candy, too. The aroma is just as enticing, with a sweet vanilla cake overtone accented by nutty kush and sweet fruits. The Sugar Cake high will come rushing in a few minutes after your first toke, filling your brain with a euphoric lifted sense of pure happiness. As your happiness expands and grows, a relaxing body buzz will wash over you, helping your physical form to settle down. A sharp pang of hunger comes next, leaving you reaching for anything in sight to snack on. Combined with its extremely high average THC level, these effects make Sugar Cake a great choice for treating conditions such as chronic pain, inflammation, nausea or appetite loss, neuropathy and the effects of chemotherapy. This bud has spade-shaped bright emerald-green nugs with lots of thin orange hairs and a frosty thick coating of tiny, golden-white crystal trichomes.

Alien OG, also known as "Alien OG Kush," is a hybrid cross of Tahoe OG and Alien Kush. First available as a clone in California’s Bay Area and now in seed form from Cali Connection, Alien OG has the typical lemon and pine OG smell and flavor, and its intense high combines heavy body effects and a psychedelic cerebral buzz. Beginners and novices, be sure to take it slow with this heavy-hitter.

Pakalolo sd is a registered trADEMARK 2019